August 17, 2020• Share
sharetweet
pin
Are you craving more insider tips from our secret society?
After indulging 4 articles without committing, we suggest subscribing to our free newsletter to satisfy your curiosities.
Unsubscribe with 1 click

It is no question that 2020 has led to unprecedented changes in the global fashion industry. As supply chains, retail and customer habits adapt to the ‘new normal’ few brands have been able to stem the tide better than Gucci. Under the helm of Creative Director Alessandro Michele, Gucci has kept up the pace – delivering fresh ideas, narratives and digital approaches to the changing times.

No wonder then, that Gucci stole the show at the recent Milano Digital Fashion with their ‘Epilogue’ collection for Resort 2021. Taking advantage of the digital nature of the show, Michele took viewers beyond last season’s FW20 backstage streaming (which gave a glimpse into the hair and makeup-to-runway process) and into a full fly on the wall view of the entire calamitous behind-the-scenes process with multiple angle cameras streaming at once.

To accompany the show, Michele paired the runway stream with a specially-curated Spotify playlist – intended as an “audio representation” of the collection itself (1970’s-80’s hits unsurprisingly featuring extensively throughout).

It has been a year of seismic changes for the Italian luxury brand. Early this year. Gucci announced that they were reducing their runway shows from five a year to two, sending shockwaves across high-fashion circles. For the Digital Fashion Week, he further proved that he is determined to “leave behind fashion’s old rules” and make his own – streaming the chaos of backstage (unheard of from immaculately presented runway shows of the past) and casting his own creative team as runway models.

According to Gucci, this is “a message about the process of experimenting; a notion that is made ever clearer if we consider what has happened so far this year that led to the first ever digitised fashion week.”

‘Epilogue’, is the last instalment of the trilogy that hints towards a new unknown beginning that paradoxically references the past. “The period of greatest liberation, which I lived through when I was a child, was the 70s, which were really the golden years of the brand I work for, and I keep going back to them because for me personally they were the real seeds of change,” said Michele.

We can expect both familiarity and anticipation – evoking feelings of nostalgia and novelty with this collection (available from October). Composed of 76 men’s and women’s looks, this collection is certainly brimming with the hippie movement of that bygone decade: a visual 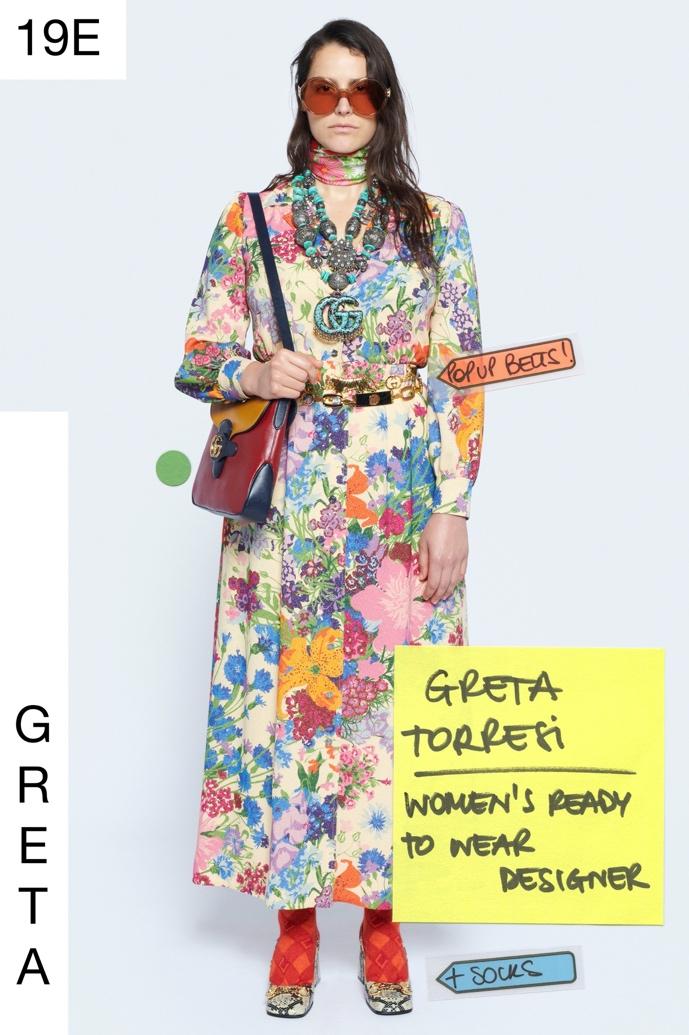 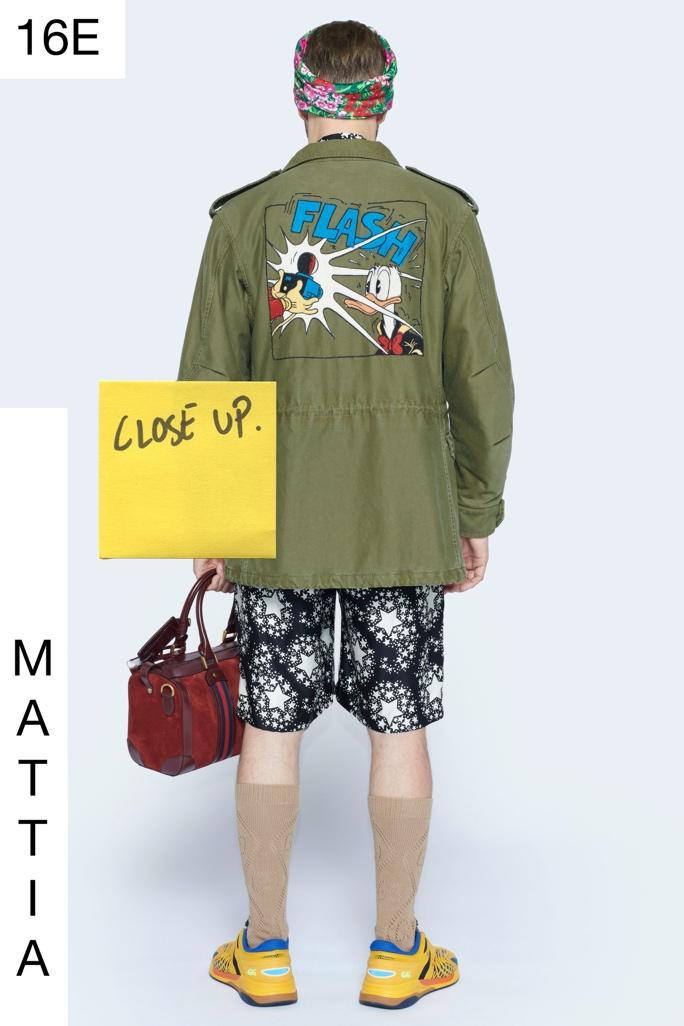 extravaganza of patterns in a multitude of colours, lots of and lots of chunky jewellery, and the appearance of endearing cartoon characters, Donald Duck, and Doraemon, a personal favourite of Michele’s.

Further thumbing his nose at tradition, Michele took the decision to display the entire Resort 2021 collection online with a lookbook shot by Mark Peckmezian. As a viewer, don’t see the actual clothes being shown off on a runway but rather a crude loading screen that harkens back to the days of dial-up internet and AOL. In this intimate buffering window – each outfit is presented, allowing them to be made more personal. On each ensemble, we are presented with who the creative is and put a face to the name, including what creative role they have and other personal quirks that bring it all together.

Large Post-It notes and flags riddle each photo, where people can find the Michele’s comments to either “focus” on certain accessories, or references to “keep” personal elements that already formed the model’s appearance (whether it be nose piercings, natural hairstyles and make-up, or even their nail polish).

For many who aren’t aware of the intricacies of the fashion industry and the process entailed with designing clothes and displaying collections, this is a striking reveal that takes down whatever preconceptions people had – for instance, that one person, the creative designer, somehow does it all. “Narrating it this way, and presenting it this way, to the press, to the outside world, looking inside the mechanism of an advertising campaign like a peeping tom is interesting to me,” Michele stated in his introduction. 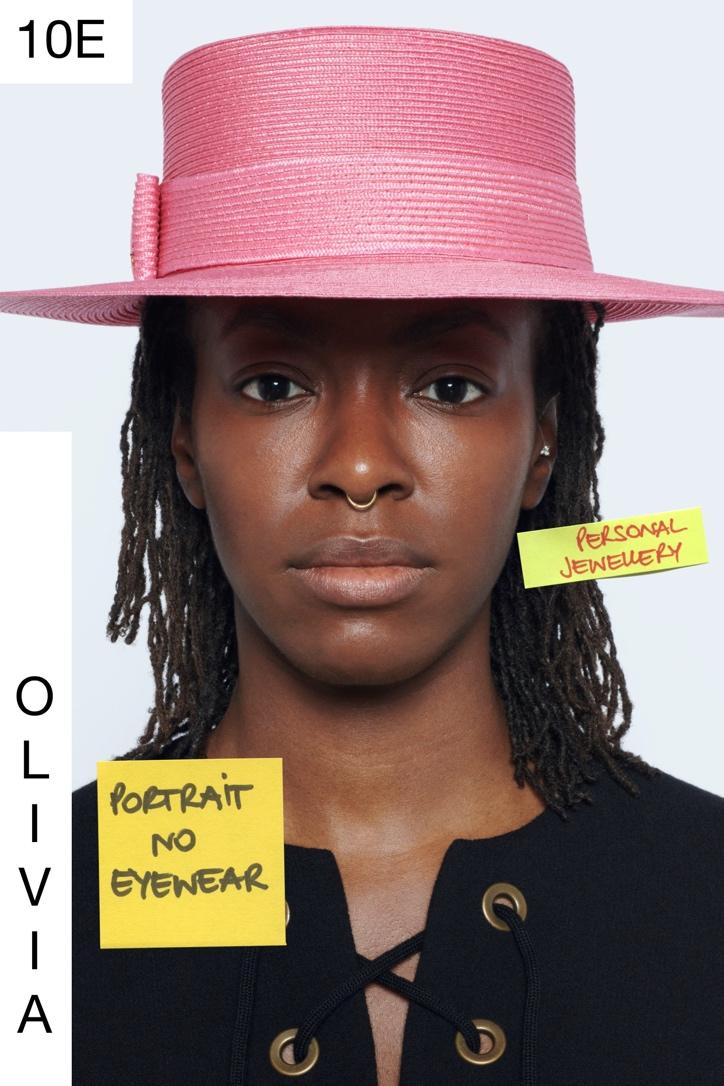 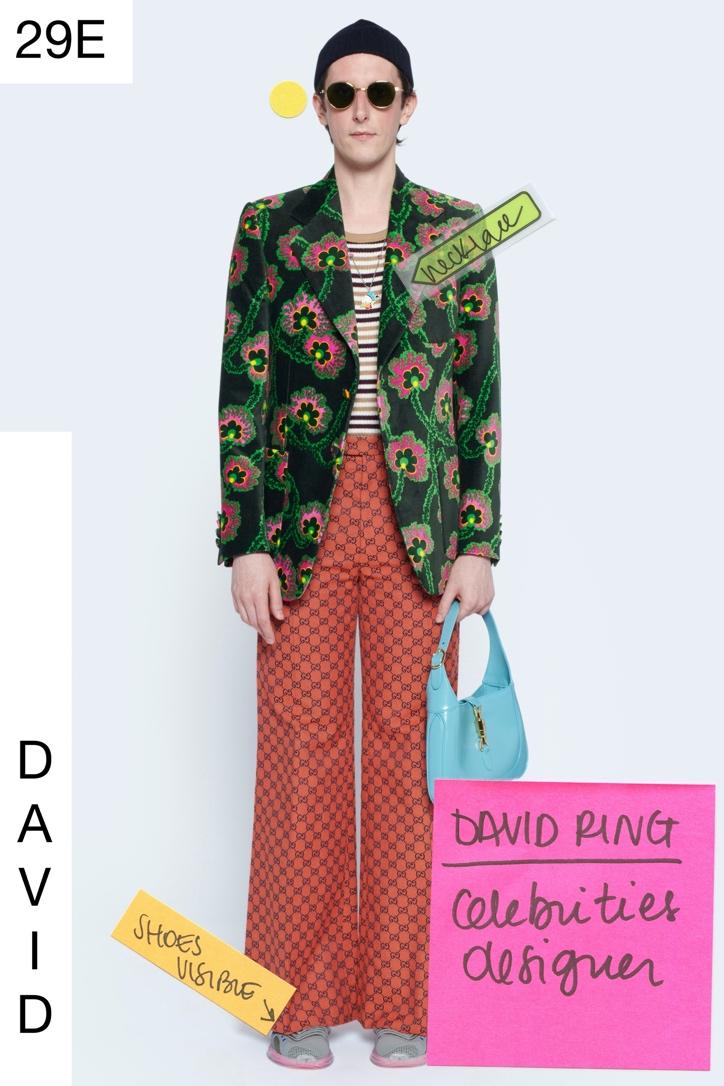 David Ring (Gucci’s Celebrities Designer), Sandrine Delloye (Gucci Kids Designer), and the Casting Assistant, Viola Di Sante, and the rest of the creative’s modelling the clothes they work on is just another unconventional way to separate the designer and the audience.  In many ways, Michele is fundamentally spearheading a change in how fashion houses present their collections, normalising the modelling of clothes by people with different body types, genders, facial structures and ages. Furthermore, keeping the designers’ personal features celebrates the individual differences that definitively sum up the individualistic direction of the “’Me’ Decade”.

The Resort 2021 clothes, are made up of a multitude of everything that made the seventies decade iconic: flared or loose-fitting trousers, flowing midi skirts, accessories varying from vibrant headscarves fashioned as bandannas to feather boas, as well as psychedelic paisley patterns that completely encompass the clothes. Alfredo Baquero Gago’s, the Women’s Ready to Wear VIP Embroidery Designer, hippie look is made even more complete with his flowing locks, navy beanie, tinted shades, and hands tucked into his coat pockets; likewise, Tania Cardelli as the Women’s Ready to Wear Fabric Researcher looks like she stands for ‘making love, not war’ with her botanical tie-front crop top and matching bandanna, accompanied by some round blue-tinted sunglasses. 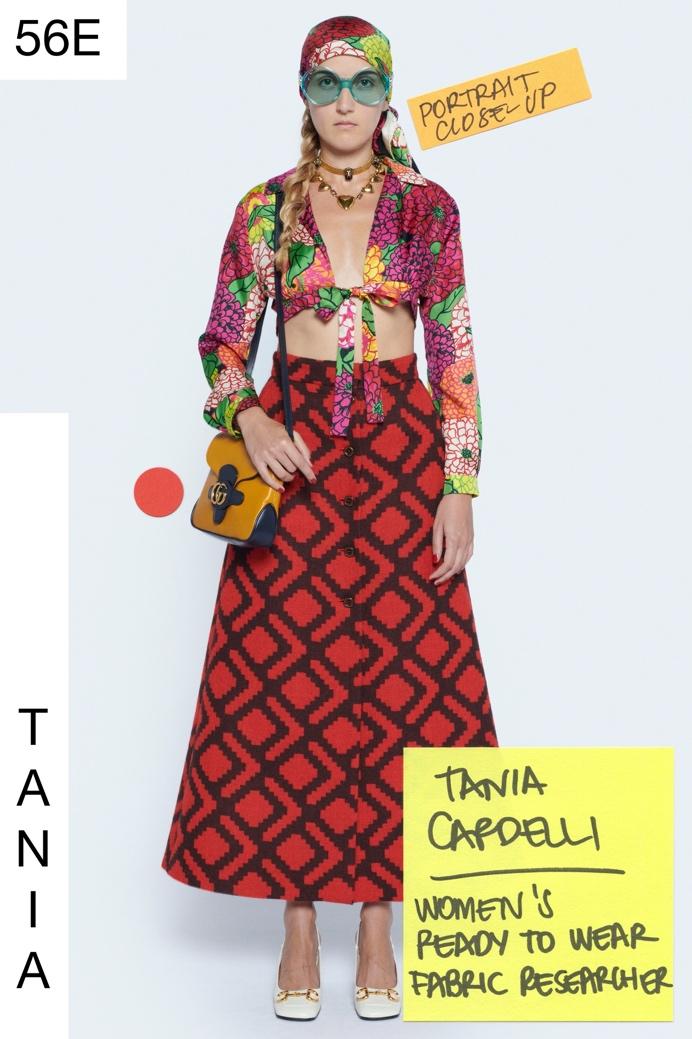 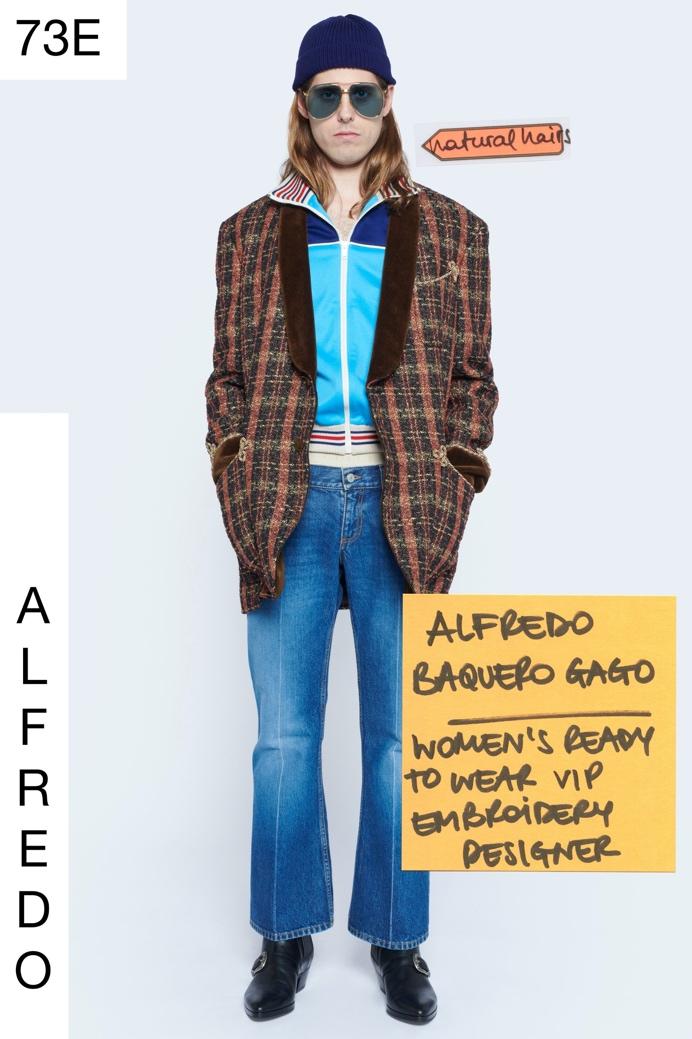 The Gucci monogram also makes its quintessential appearance throughout all pieces – ranging from prints on bags to footwear, and as hardware on clasps and belt buckles. Classic Gucci bags – Dionysus, Ophidia, and fresh, modern takes of the Jackie 1961 – were also featured as a way to further hone in on the timeless aspect of this entire collection.

Of course, it would be remiss to not mention the resort-like aspects of this collection itself, including the token nautical theme, the large sunglasses, the glossy scarves, wide-brimmed hats and the floral prints made in a collaborative effort with Liberty London. Beauty Product Designer Valeria Quercia and Men’s Ready to Wear Designer Simone Bellotti style it best with the intricate chain belt that cinches the long-sleeved burgundy dress at the waist and pastel pink wide-brimmed hat, as well as the nautical-themed jumper and Gucci-monogrammed boat shoes. 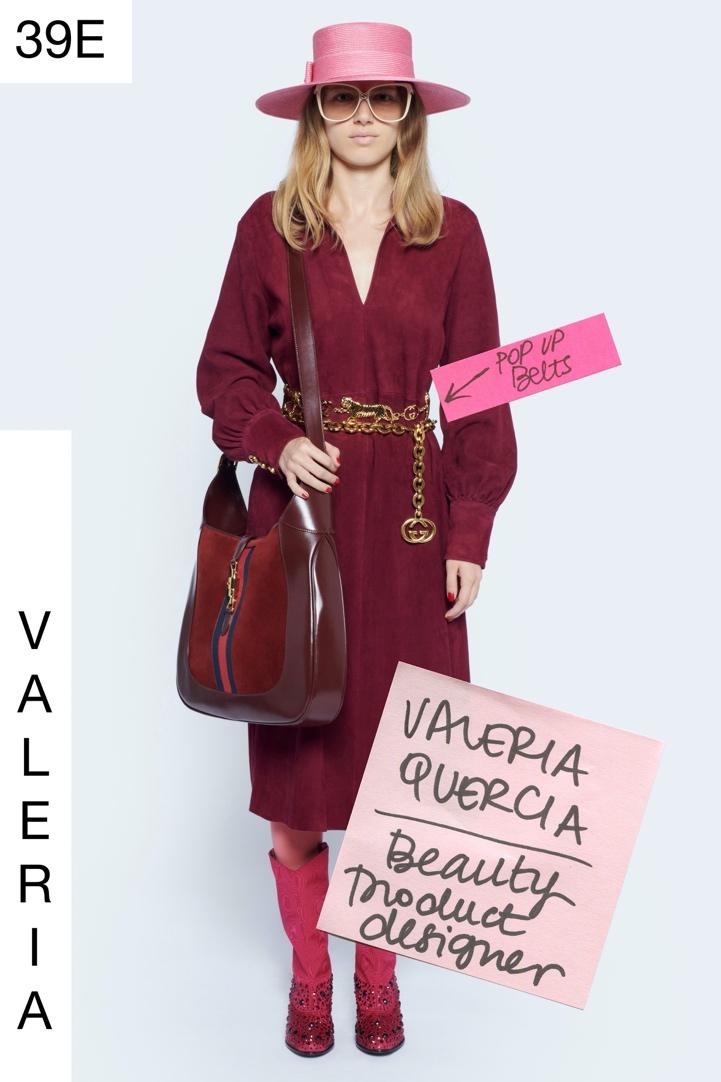 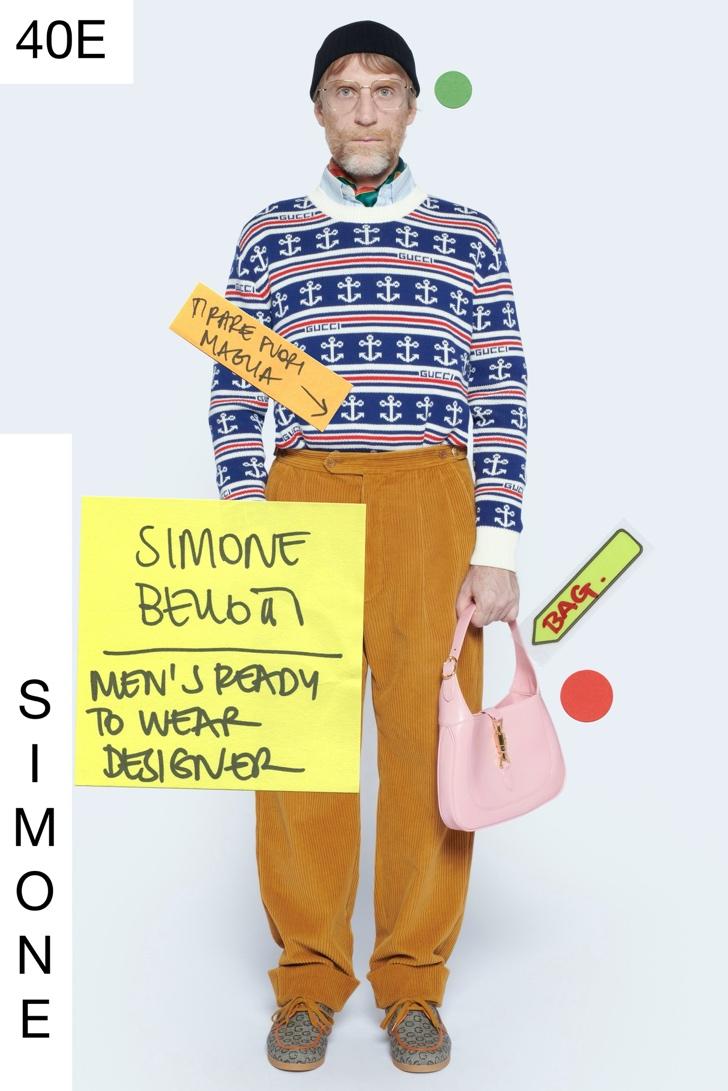 Michele’s process involves taking things out, as well as incorporating or moving around different designs and shapes, representing the freedom of the 1970’s with a rampage of colours, patterns – clashing and juxtaposing simultaneously.

“Inside the collection there is the idea of clothes of the bourgeoisie designed to be worn by the kid on the street, the types of clothes worn by an elderly man, a memory of a maths teacher, along with a certain type of elegance that reminded the designer of his grandmother who lived in shirt dresses.”

Considering Gucci’s decision to minimise the number of collections they come out with annually (which fall in line with growing calls to make luxury fashion more sustainable and ethical) this unique display of a resort collection is perhaps a closing chapter for the brand and an opening one as it explores new directions. Indeed, rather than signifying the end, ‘Epilogue’, seems to refer to a new beginning.

With Resort 2021, Michele managed to adapt to the current times and environment, and use the novelty of the situation in his favour to further let go of traditional fashion norms; “a moment to be reborn.” this rebellious, innovative approach, ties in to the individualistic and nonconformist qualities of the seventies decade that were represented among the many pieces in this collection. The clothes and accessories themselves were both loud, multi-layered, chaotic combinations of different fabrics, patterns and colours. But by bringing in the elements of past decades to our present, Michele has revived a world of nostalgia and colour – giving us the gift of familiarity and comfort during these difficult, uncertain, times.

UP NEXT: Check Out 2020’s Rarest Sneaker Drops…

What would an extra $5,000 to $10,000 monthly PASSIVE INCOME do for you? Most try to teach you how to generate passive income from an automated eCommerce store, we just fully manage it for you. Our team handles everything from finding winning products, building, managing and scaling your Amazon or Walmart store – giving you a hands-free stream of income. CLICK HERE TO FIND OUT MORE ABOUT DDW ECOM.
sharetweet
pin