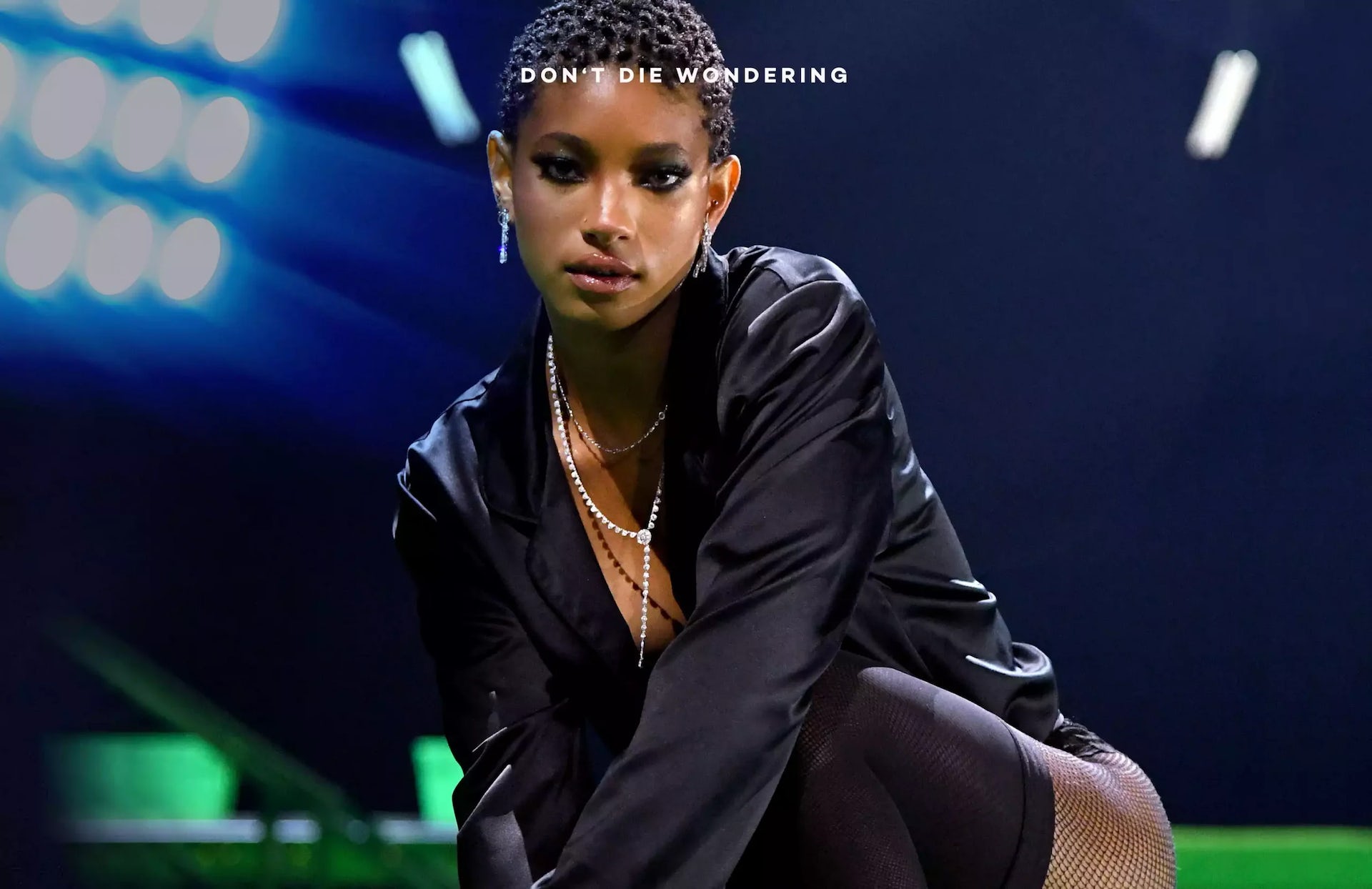 Willow Smith: ‘It’s Going To Be A Journey And There’s More To Come’

Believe it or not, it’s been 11 years since Willow Smith began to carve out her own path with the release of 2010’s Whip My Hair.

Her debut single launched her out of the shadow of her parents (of course, Will Smith and wife Jada Pinkett Smith) and into the limelight, marking the beginning of a music career that has already seen no shortage of twists and turns.

Now, at just 20-years-old, she’s celebrating the release of her fourth studio album, lately i feel EVERYTHING.

The album, in a break from her previous work, takes on a rebellious, pop punk sound and features collaborations with Cherry Glazerr, Travis Barker and Avril Lavigne, more than proving her influence as one of music’s biggest rising stars.

It’s certainly a break away from her styles of the past. Her 2015 debut album, ARDIPITHECUS, was a vibrant musical collage of dreamy hip-hop and pop, with songs which have since gone on to be resurrected as favourites amongst users of TikTok. For those who got their first taste of Willow this way, the sounds on lately i feel EVERYTHING will likely come as a bit of a surprise – a good one, nonetheless.

Taking her sound into the world of rock and pop-punk, however, was a direction that Willow was always heading in – mainly due to the opportunities that she had to watch her mother Jada perform whilst growing up.

“My mom was my inspiration as a child,” she told W, “I went on tour with her when she performed at Ozzfest with her band, Wicked Wisdom. Seeing a Black woman on stage singing rock was so amazing – but a lot of people weren’t happy seeing a Black woman in that space.”

“She handled it with such grace. She was like ‘Some people are upset, but we don’t focus on that. We focus on doing our best and being strong and doing what we want to do’.”

It was this focus on simply doing whatever you wanted that gave Willow the feeling that this was the time to break new ground within her music, as she used the early months of COVID-19 lockdown to experiment.

“I was just like, ‘You know what? Eff it’. I got in the studio and started messing around.”

“I was doing a whole bunch of demos during quarantine because I was like, I literally have nothing to do. Why not let me just see if I can actually achieve this musical vision?”

After her new sound started to come together, it was time to bring in the big guns. There are few 20-year-olds out there with a contact list like Willow’s – and she well and truly put it to good use here.

“We got into the studio together and I let him listen to Transparent Soul and he loved it! I was shaking in the studio, worried about whether he would think it was lame.”

Her second collaborator was just as impressed.

“When I heard what she did with what I sent her, I felt like I was transported back to my tween days, in the car, just screaming, ‘I don’t have to try to make you realize’!”

“It was beyond any joy that I could have imagined.”

With such established stars jumping at the opportunity to work with her, it’s clear that Willow has earned the respect of both her peers and the artists that came before her. It’s easy to see why, too – despite her young age, she’s always approached the world, her views, her music with an air of maturity that immediately stands out.

That maturity is on show in no shortage during her appearances on Red Table Talk, the Facebook Watch exclusive talk show that Willow co-hosts alongside her mother and grandmother. Since the show debuted in 2018, it’s been met with widespread critical acclaim, having offered a space for discussion on a wide variety of hot button issues – everything from sexuality, to addiction, to race, to politics, to mental health – with viewpoints from three generations.

Willow’s work presenting on the series has even deservedly earned her a Daytime Emmy nomination alongside her matriarchal co-hosts. Despite being the youngest of the show’s presenters, Willow is more than capable of holding her own and dealing with some difficult issues. During her time on the show, she’s opened up about her sexuality, her own struggles with her mental health and recently led a one-on-one tell-all interview with Michael Jackson’s daughter, Paris.

How is it that someone who has had so much going on – so much work to do – since releasing their debut single at just 9-years-old is so centred and level-headed? According to Willow, it’s taken her a while to get there.

“When you have to work and a lot of people’s incomes are on the line if you don’t perform well, that’s not conducive with childhood,” she explains, providing insight into her experience after the release of Whip My Hair.

“That makes you feel like, ​‘Damn, I’m not enough. I need to do something to earn your love, your acceptance and your attention.’ That just kind of made me suspicious of everybody.”

It’s a feeling that she’s had to learn to come to terms with over the years.

“I haven’t resolved that feeling, but I’m aware of it,” she says.

“I have mantras, affirmations and practices that I do, to centre myself and understand that I see my value.”

‘lately i feel EVERYTHING’ is out now.

READ MORE: Ariana Grande: ‘I’m A Person Who’s Been Through A Lot And Doesn’t Know What To Say About It’