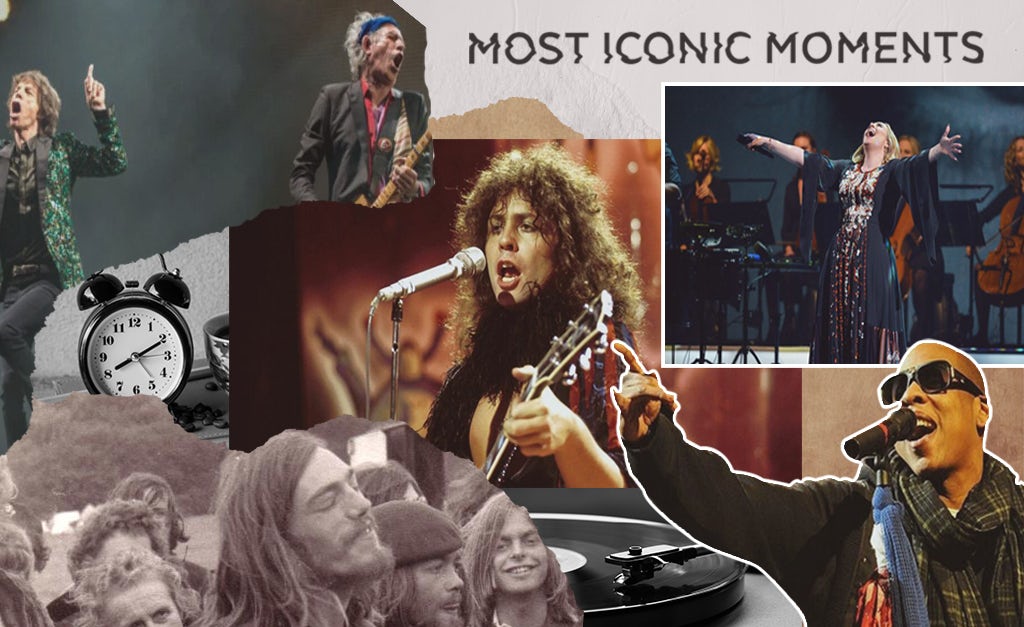 Few festivals around the world hold the weight or status of the UK’s much cherished Glastonbury Festival. Started in 1970, ‘Glasto’ carried on the torch started by Woodstock and the Isle of Wight Festival during the previous year’s ‘summer of love’ and hasn’t stopped since.

This year, the Glastonbury festival was due to celebrate its 50th anniversary with headline acts including Kendrick Lamar, Sir Paul McCartney, Taylor Swift and Diana Ross leading a star-studded bill with international acts Dua Lipa, Camila Cabello and Pet Shop Boys in attendance. Unfortunately, due to social distancing measures imposed by the UK government during the current Covid-19 crisis, the festival announced its postponement until 2021 today.

As we reel from this sad (but necessary) news, let’s take a look through its storied history at some of the most iconic moments in its long 50-year history

The most iconic moments in its long 50-year history below

Britain’s rave culture got its first shot at Glasto with Underworld’s hits ‘Born Slippy’ and ‘King Of Snake’, marking a change for electronic music to be embraced fully much later in the festival’s history including a legendary performance by The Chemical Brothers a decade after.

The ‘Man in Black’ introduced one of his last albums American Recordings to an admiring crowd of seemingly unlikely fans – creating a new lifelong passionate fanbase and making festival history.

Widely regarded as one of the best performances in the festival’s history, Radiohead dominated with performances from its just-introduced infamous third album Ok Computer. The band returned in 2003 and 2017 once again but nothing beat introducing ‘Karma Police’, ‘No Surprises’ and ‘Paranoid Android’ to a music-ravenous crowd of 200 000 people.

Ziggy Stardust’s alter ego played the festival in its second year (1971) and returned at the first Glastonbury of the millennium with a roaring push – taking with him all the greatest tracks from his catalogue and weaving his iconic performance into festival lore.

The rap mogul made history when he headlined the Pyramid Stage, officially inviting hip-hop to join the ranks of what had traditionally been seen as a rock festival. Oasis front man Noel Gallagher snubbed the star’s performance, leading to Jay-Z starting his set with a rendition of Wonderwall. His superstar wife Beyonce rocked the stage three years later cementing the couple further as the king and queen of contemporary music.

The legendary singer-songwriter was originally due to play 12 years prior but cancelled due to injury (he sliced his finger whilst prepping a finger sandwich) but finally made it to the stage in 2009 bringing with him crowd-favourites like Heart of Gold and Rockin’ In The Free World as well as a couple of Beatles covers.

The ‘Stones had never played Glasto until 2013. Let that sink in for a moment… When they finally did (50 years after the formation of the band) they electrified audiences with all their classic hits, everything from Gimme  Shelter to You Can’t Always Get What You Want (a rendition of which they played with a full choir ensemble).

James Hetfield and team brought with them the unbridled metal energy that made them infamous – playing the enormous crowds like a fiddle with covers, classic and fireworks ensuring an epic performance.

Dave Grohl of The Foo Fighters broke his leg, Florence Welch came to the rescue. Being brought in at the last minute to replace TFF was no easy feat but F+TM was up to the challenge. The London band brought an energetic performance that is not soon to be forgotten with their chart-topping hits causing mass singalongs throughout the camp.

As a 21-year-old, Adele was riding high, she just dropped her second album (also aptly named 21), and caused a stir when her new single Someone Like You became one of the new classic ballads of the festival.