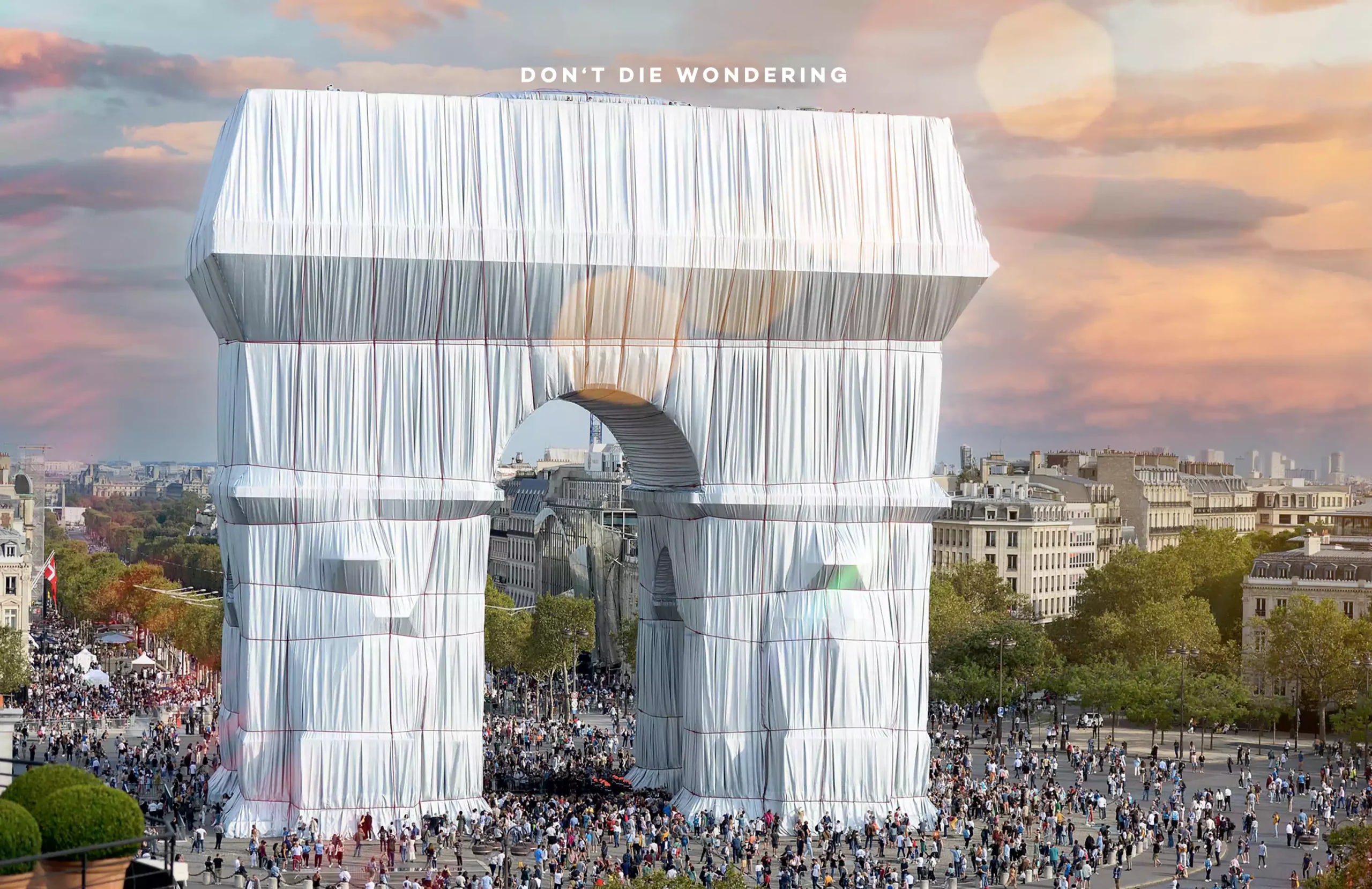 On Christo and Jean-Claude, The Artists that Wrapped the Arc du Triomphe

Revisiting Christo and Jean-Claude, the duo that wrapped up the world and decorated landscapes with their massive sculptures.

Like a nice Christmas gift, last year the iconic Parisian monument was wrapped up in a grey fabric, as if ready for transportation elsewhere. Whether the photo-op hungry tourists, (known to have been expecting the arc in all of its unwrapped glory) were aware of it or not, they were witnesses to one of the 21st century’s greatest artist duo; Christo and Jean-Claude.

Christo, the Bulgarian-born part of the duo, fled his country in the late fifties when the Hungarian revolution broke out. He made his way to Vienna and enrolled in its fine arts academy, in order to avoid being placed in a refugee camp up until he saved up enough money to go to Paris, where he met his wife, Jean-Claude.

One of the first artworks they did together was the Wall of Oil Barrels in the early 1960s, a direct reference to the Berlin Wall and the Iron Curtain, but barricading instead of Paris’ most narrow street. They did this illegally, without searching for the correct permits from the council. It is also in the early 1960s that Christo wrapped up a naked woman — perhaps the artist’s first inclination towards wrapping the unconventional.

His venture into the wrapping up of monuments begins in Italy, where Christo wraps up a sculpture in the garden of the Villa Borghese. This new-found art focus is shortly followed by one of the gilded statues on the Esplanade du Trocadéro in Paris. From then onwards, it’s just a whole load of wrapping around the globe; from The Wrapped Coast Project in Little Bay to the Surrounded Islands in Biscayne Bay or The Pont Neuf, Paris.

The interesting thing about Christo and Jean-Claude’s work is how they combine art, sculpture, architecture and fine engineering to produce pieces of tremendous sizes. Their project, always making use of fabric and large open spaces is a direct play on the scale but the duo insist they are nothing but works of joy, beauty and pleasure.

The idea of wrapping the Arc du Triomphe was one that Christo had for around 60 years before he finally applied and was granted the permit. Unfortunately, Christo passed away in New York before the project’s completion, leaving his team behind to finalise the artist’s work as Jean-Claude passed away herself back in 2009.

With Christo’s passing and the Arc du Triomphe no longer wrapped up, there is only one permanent piece of art left to commemorate the iconic duo; The Mastaba of Abu Dhabi. Set in the emirates, this sculpture is made out of enamel paint, wood, paint, sand, and cardboard and stands and is the largest standing sculpture (at least in terms of volume) in the whole world.

If the duo was so good at wrapping up the world, we can only imagine how good their gift-wrapping was during family Christmas times.